How do I use this?

I have been receiving Community Access support from IFYS since 2014.  As of 2015 I transferred my accommodation Support to them also.  At this time I was 182 kgs.  My staff have supported me to access a care plan from my general practitioner.  My team have worked with me, my family and my dietitian to improve my health and wellbeing by introducing healthy choices and ensuring I stick to them.  I generally began to lose a kilo but at a recent weigh in I realised I have lost 50kgs.

Time with Family - Is the Sweetest Time of all

I couldn't wait for the Countdown to Xmas in 2016.  After saying goodbye to my housemates and wishing everyone a Merry Xmas, I headed by shuttle Bus to Brisbane Airport to meet my sister to catch a plane to Sydney.  It is always exciting flying.  I touched down in Sydney and headed straight to the train at Circular key to catch Ferry to Manly.  I met up with my Aunty who is always very happy to see us.

After settling in we chatted, laughed and ate great food at the Wharf Restaurant.  My favorite memory of my holiday was swimming in my Aunty's parnter's pool.  I find swimming refreshing.  Aunty Sue took a nice picture of Monique and me bobbing around in the pool.  Xmas day was hot so we spent most of our time in the backyard.

I went to a stage show when I visited.  Aladdin was showing at the Theatre.  Five days later, my sister and I left Sydney and reversed our travel jouney by catching the Ferry first on our long journey home.  I stayed at my sister's place for a night before arriving back to my house in time for New Year's Eve.  I enjoyed sharing my holiday expereince with Damian and Paul when I got home. 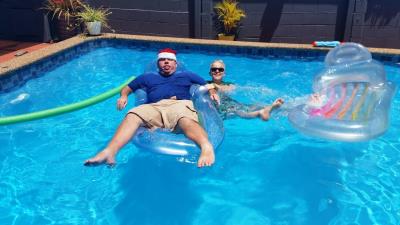 Wax on Wax off

Here I am doing Karate in Kawana.  I go every Thursday.  I have progressed to my Yellow Belt. 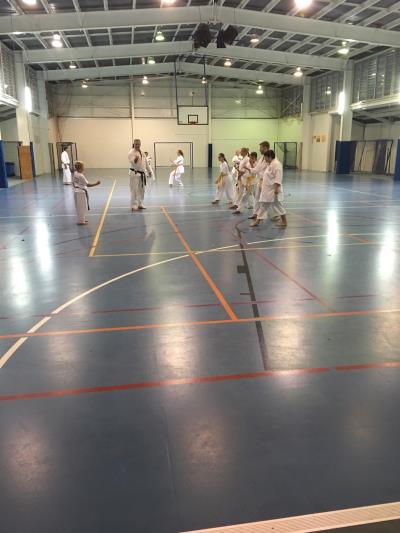 We have been very busy at our house.  We started a veggie garden in the backyard.  This way we can grow some of our own food.  I love to eat organic veggies as they are healty for me.  I cannot wait for them to grow.  I water them every few days and I let the sun do its job.  The veggies are already growing and we should be able to harvest some in 6-8 weeks.

One of My Favourite Things

This is my blooming herb garden.  I collected these seeds from a newspaper giveaway.  "I love gnomes" 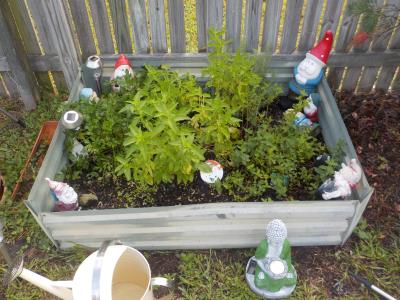 This is my apple tree that I have planted in the garden - I can't wait for it to grow. 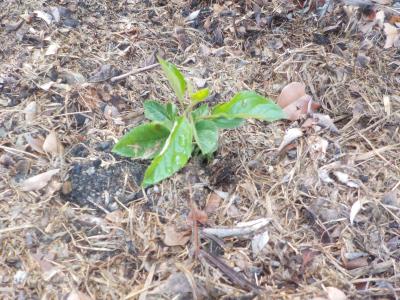 This is where I put the seeds, it took a few weeks for them to appear. I am very clever after cutting my apples, I carefully pick out all of the seeds and then allow them to dry before I plant them!!!

Here are some more apple trees I grew, I gave them to people who are important to me. 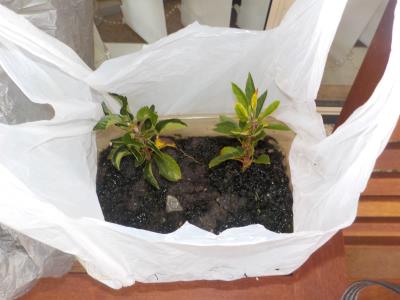 Did you know that I find strawberries the easiest plant to grow?

I have two gardens, both at the level what works just right for me.

My long skinny garden bed is where I plant my berries. 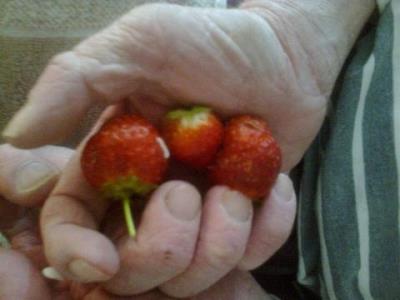 Over the past six months myself and Cardie have embarked on a personal goal of mine, to learn the guitar.  The lessons have been held at the Community Centre in Coolum.  During our lessons, quite early on we found out there would be a local festival organised by IFYS at Tickle Park.  I was approched by one of the planners of the festival, and asked if I would like to be in it? and I said YES.  So Cardie and I started to get my performance pieces together and began practicing for the event.

For the next three months we practiced, practiced and practiced. We even had time to collabrate on my first song called "Lets Jam" which I penned myself.

Fast forward to the event - The morning of festival day, we had one last practice then it was SHOW TIME.....

To say I was feeling the butterflies in my stomach was an understatement.  When I took to the stage it was reassuring seeing familiar faces in the crowd, as I started to sing and play guitar on stage.  I felt calm and I know that everyone who was watching me was so proud of me in what I had acheived in so little time.

The day started with a little bit of drama, on our way down the Sunshine Motorway, all of a sudden everybody in front of started breaking.  We went from 100km's an hour down to zero in what seemed like second's. Narrowly avoiding a fender bender.  Up ahead in the distance we could see the front end of a ute badly damaged on the side of the road.  We waited for about 10 minutes in the traffic jam, and then had to turn around, and head back to Coolum.  My appointment had to be cancelled.

'That didnt bother me though because we were keen to go for an extended bike ride.. We started in Mudjimba and rode around Apex Scout campsite. After taking a few pictures we rode to the 7/11 and grabbed a drink.

On the way back we rode through a carpark and I skidded on some loose gravel, luckily I performed a great army roll reducing the amount of skin to come off my limbs.

The rest of the ride was slow and steady and a couldn't wait to get home.

Beautiful One Day - Perfect the Next

Myself and housemate had a day at the beach where we enjoyed another beautiful day in our backyard, Yeppoon Beach.

We checked out the Water Park and the new gym equipment.  We took them for a test drive and did a few reps. Can't get a better gym view, I think.

Q: Do you want to hear a construction joke?

A:  Come back later as I am working on it.